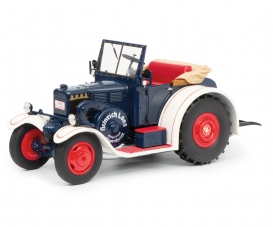 Founded in the 19th century, Heinrich Lanz AG in Mannheim very quickly developed into one of Germany‘s leading agricultural machinery manufacturers. From the 1920s, the Mannheim company went into the production of farm tractors and thus played a significant part in the motorisation of German agriculture. Under the name of Lanz Bulldog, farm tractors with a single-cylinder, glow-plug engine were produced with great success. These tractors made such an impression that the name Bulldog became widely used in Germany as a colloquial expression for farm tractors in general. Throughout the Lanz-Bulldog-era, a wide range of tractor series were developed under model names such as „Ackerluft-Bulldog“, „Verkehrsbulldog“ or the fast model for road use, the „Eilbulldog“ (Hurry Bulldog). Schuco is going to produce in a limited edition of 1.000 pieces a miniature model of this Lanz Bulldog to a scale of 1:18. Just like the other models of the Schuco Edition 1:18, the Bulldog comes with many lovingly crafted details.   Attention ! Ne convient pas aux enfants de moins de 14 ans. 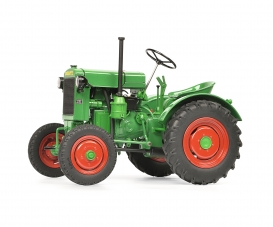 Until the mid-1930s, agricultural tractors were only to be found on larger farms. This circumstance changed significantly when the Deutz company, based in the Cologne suburb of Deutz, introduced the Deutz F1 M414. The Deutz, commonly known as the “farmer’s tractor”, thus played a major role in the motorisation of small and medium-sized farm businesses. At the same time, it increasingly took over from horses. With an initial purchase price of only 2,300 Reichsmarks, the F1 M414 was considered very cheap. It’s water-cooled Deutz 11 HP diesel engine, type F1M414, lent its name to the type designation at the same time. Its transmission had 3 forward gears and one reverse gear. In addition a belt pulley, a PTO shaft, a mower drive and pneumatic tyres were among its features. The Deutz was very popular with farmers, as the sales figures also reflect. Up until 1942, approx. 10,000 units had been sold, making it the most successful German tractor before World War II. After the war, production resumed in the almost completely destroyed Deutz factory. In the beginning, tractors were assembled simply out of spare parts that had survived the war. Later, the F1M414 received a fourth forward gear, a foot brake and a foot throttle. After 1950, its power output increased from 11 to 12 HP. From 1945 up until 1951, approx. 9,000 units were produced, meaning that 19,000 Deutz F1 M414 units were built altogether   Attention ! Ne convient pas aux enfants de moins de 14 ans. 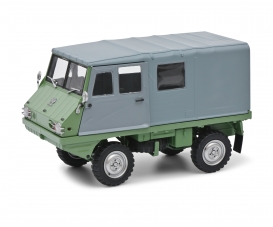 In 1956, the Austrian Armed Forces decided to purchase a small all-terrain vehicle, which was intended to be particularly suitable for use in moderately-heavy terrain and in mediumsize mountain regions. Furthermore, the vehicle should have a payload of at least 500 kilograms and as low a dead weight as possible. Under the technical direction of chief engineer Dr Erich Ledwinka, Steyr-Puch in Graz began to develop this offroad vehicle, which later became famous as the “Haflinger”. During the production period of the “Haflinger”, from 1959 to 1974, a total of 16,647 units of this ultra off-road allrounder were produced at the Steyr-Puch plant in Graz. It’s remarkable that more than 13,000 Haflinger were delivered to exactly 110 different countries around the world. Schuco now presents this classic of vehicle history for the first time as a high-quality metal model in a scale of 1:18.   Attention ! Ne convient pas aux enfants de moins de 14 ans.