"Its predecessor, the BMW R 50 S, was already becoming outdated when BMW introduced the new top model, the BMW R 69 S, in 1960. The R 69 S’s 595 ccm3, air-cooled, 2-cylinder boxer engine produced 42 HP and, according to the BMW manual, enabled its proud owner to reach top speeds of 175 kilometres per hour when the rider was recumbent and 160 kilometres per hour when they were sitting upright. This made the R 69 S one of the fastest street motorcycles of the sixties. As the first motorcycle in BMW’s motorcycle history, the R 69 S could also be ordered in an elegant ivory colour at the customer’s request. Introduced in 1960 at a price of 4,030 German marks, over 11,000 units of the R 69 S had been sold before it ceased production in 1969."   Warning! Not suitable for children under 14 years. 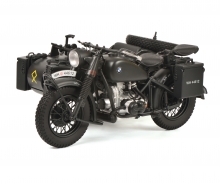 As long ago as 1937 the German army ordnance office awarded a development contract for an „extra heavy motorcycle with organically attached sidecar“. Both BMW and Zündapp participated in the invitation to bid, each submitting their own designs. The BMW R 75 was fitted with a 745 cm³ boxer engine producing 26 PS of output power, which was transferred via a cardan shaft and limited-slip differential to both the rear wheel and the sidecar. Equipped with four forward, one reverse and three cross-country reduction gears, more than 16,500 of these BMW R75 motorcycle combinations were manufactured in the period 1941 - 1944. Today, it is a much sought-after collector‘s piece for motorcycle enthusiasts right around the world. The BMW R75 with side car is a brand highlight in the high quality and precision performance Classic Motorcycle Edition 1:10 from Schuco. The series meets the highest quality standards and wows fans with its authentic high-gloss finish. Features such as rotating wheels and fully functional suspension are an integral part of these models and have established them as a firm favourite with motorcycle enthusiasts.    Warning! Not suitable for children under 14 years. 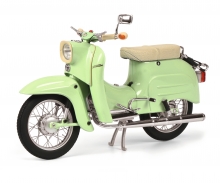 In terms of production quantity, the Simson Swallow is the most successful twowheeler in Germany‘s history with over a million units produced. Manufactured in the „Fahrzeug- und Jagdwaffenwerk Ernst Thälmann“ division within the Simson company in Suhl, from 1964 onwards the swallow was the first model of Simson‘s newly developed series with bird names. Mopeds such as the „sparrow“, „starling“, „sparrow-hawk“ and „hawk“ were also produced in Suhl in considerable numbers. The Simson Swallow KR 51/1 is a brand highlight in the high quality and precision performance Classic Motorcycle Edition 1:10 from Schuco. The series meets the highest quality standards and wows fans with its authentic high-gloss finish. Features such as rotating wheels and fully functional suspension are an integral part of these models and have established them as a firm favourite with motorcycle enthusiasts.   Warning! Not suitable for children under 14 years. 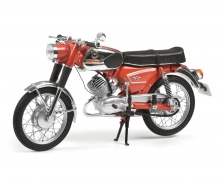 Like the Hercules K 50 RL, at the beginning of the 1970’s the Zündapp KS 50 Super Sport also ranked among the favourite childhood dreams of many boys passionate about motorcycles. The Zündapp also had a 49 cc, air-cooled two-stroke engine which had to be refuelled with a petrol oil mixture in a ratio of 1:50 that was customary for the time. The official top speed was, like with all mopeds, exactly 85 km/h. After Zündapp shifted its motorcycle production in 1958 from Nuremberg to Munich, the KS 50 Super Sport was produced from 1970 to 1972 in significant quantities in the Bavarian metropolis.   Warning! Not suitable for children under 14 years.